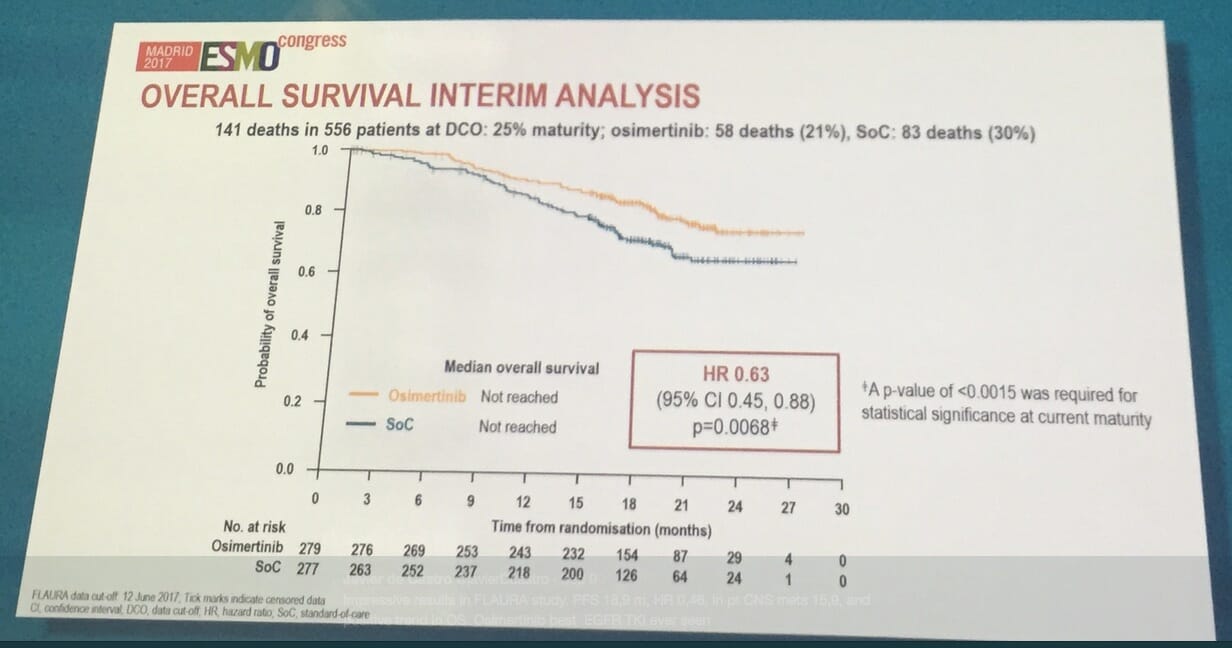 Phase III FLAURA trial results show osimertinib reduced the risk of progression or death by more than half, with consistent benefit across all subgroups, including patients with and without brain metastases

Unprecedented median progression-free survival (PFS) of 18.9 months compared with 10.2 months for the current standard of care

Results of the Phase III FLAURA trial were included at the Presidential Symposium I of the European Society of Medical Oncology (ESMO) 2017 Congress in Madrid, Spain, and demonstrate a superior, clinically-meaningful PFS advantage with osimertinib compared with current SoC EGFR-TKIs (erlotinib or gefitinib).

Sean Bohen, Executive Vice President, Global Medicines Development and Chief Medical Officer at AstraZeneca, said: “The FLAURA data are truly exciting. Until now, even with the therapeutic advances offered by the first- and second-generation EGFR inhibitors, less than 20% of EGFR mutation-positive NSCLC patients survive for five years. The FLAURA data suggest early and sustained benefit with Tagrisso that has the potential to significantly impact long-term patient outcomes and help address the considerable unmet need that remains.”

Dr. Suresh S. Ramalingam, Principal Investigator of the FLAURA trial, from the Winship Cancer Institute of Emory University, Atlanta, USA, said: “The FLAURA data for osimertinib are likely to result in a major paradigm shift in the treatment of patients with EGFR mutation-positive advanced lung cancer. Not only did the trial demonstrate a robust improvement in efficacy with osimertinib when compared to other commonly-used EGFR inhibitors, the side effects profile was also more favourable with osimertinib”.

*0.0015 was the threshold required for statistical significance at the current level of maturity. A final OS analysis is planned at a later stage.

Additional highlights from the FLAURA data include:

Osimertinib is currently approved in more than 50 countries, including the US, EU, Japan and China, as 2nd-line treatment for patients with advanced NSCLC who progress following treatment with an EGFR-TKI due to the EGFR T790M resistance mutation.

Lung cancer is the leading cause of cancer death among both men and women, accounting for about one-quarter of all cancer deaths, more than breast, prostate and colorectal cancers combined. Approximately 10-15% of patients in the US and Europe, and 30-40% of patients in Asia have EGFRm NSCLC. These patients are particularly sensitive to treatment with currently-available EGFR-TKIs, which block the cell signalling pathways that drive the growth of tumour cells. However, tumours almost always develop resistance to EGFR-TKI treatment, leading to disease progression. Approximately half of patients develop resistance to approved EGFR-TKIs such as gefitinib and erlotinib due to the resistance mutation, EGFR T790M. Osimertinib also targets this secondary mutation that leads to disease progression. There is also a need for agents with improved CNS efficacy, since approximately 25% of patients with EGFRm NSCLC have brain metastases at diagnosis, increasing to approximately 40% within two years of diagnosis.

FLAURA assessed the efficacy and safety of osimertinib 80mg orally once daily vs. standard-of-care EGFR-TKIs (either erlotinib [150mg orally, once daily] or gefitinib [250mg orally, once daily]) in previously-untreated patients with locally-advanced or metastatic EGFRm NSCLC. The trial was a double-blinded, randomised study, with 556 patients across 30 countries.

Tagrisso is a third-generation, irreversible EGFR tyrosine kinase inhibitor (TKI) designed to inhibit both EGFR sensitising and EGFR T790M resistance mutations, with clinical activity against central nervous system (CNS) metastases. Osimertinib 40mg and 80mg once-daily oral tablets have been approved in more than 50 countries, including the US, EU, Japan and China, for patients with EGFR T790M mutation-positive advanced NSCLC. Osimertinib is also being investigated in the adjuvant and metastatic 1st-line settings, including in patients with and without CNS metastases, in leptomeningeal metastases, and in combination with other treatments.

About AstraZeneca in Lung Cancer

AstraZeneca is committed to developing therapies to help every patient with lung cancer. We have two approved therapies and a growing pipeline that targets genetic changes in tumour cells and boosts the power of the immune response against cancer. Our unrelenting pursuit of science aims to deliver more breakthrough therapies with the goal of extending and improving the lives of patients across all stages of disease and lines of therapy.

About AstraZeneca in Oncology

AstraZeneca has a deep-rooted heritage in Oncology and offers a quickly growing portfolio of new medicines that has the potential to transform patients’ lives and the Company’s future. With at least six new medicines to be launched between 2014 and 2020 and a broad pipeline of small molecules and biologics in development, we are committed to advance New Oncology as one of AstraZeneca’s five Growth Platforms focused on lung, ovarian, breast and blood cancers. In addition to our core capabilities, we actively pursue innovative partnerships and investments that accelerate the delivery of our strategy, as illustrated by our investment in Acerta Pharma in haematology.

By harnessing the power of four scientific platforms – Immuno-Oncology, Tumour Drivers and Resistance, DNA Damage Response and Antibody Drug Conjugates – and by championing the development of personalised combinations, AstraZeneca has the vision to redefine cancer treatment and one day eliminate cancer as a cause of death.

AstraZeneca is a global, science-led biopharmaceutical company that focuses on the discovery, development and commercialisation of prescription medicines, primarily for the treatment of diseases in three main therapy areas – Oncology, Cardiovascular & Metabolic Diseases and Respiratory. The Company also is selectively active in the areas of autoimmunity, neuroscience and infection. AstraZeneca operates in over 100 countries and its innovative medicines are used by millions of patients worldwide.